Thanks to philosophy professor Anne Ashbaugh, author of Mythopoiesis, I've been invited to participate on a panel at the SAGP conference this weekend, and to present performances of poetic monologues.


Two Washington D.C.-based performers, Genna Davidson and Kimberly Mikec, will drive up with me on Friday, to meet a third, Rachel Morrissey, who has moved to New York to attend the New School since beginning the Idylls project with us this past summer.  All three will perform at the panel, as well as at the November 20th event in Alexandria.


Right now I'll profile the two making the trip up from the D.C. area:


The Sorceress Idyll is the form most closely taking off from the original form by Theocritus.  My version tracks Theocritus' version as well as Virgil's, while reinterpreting both the scene and the form itself.  Kimberly's interpretation of her character has been fascinating for me - my "Simone" already had some contemporary twists on the ancient Greek Simaetha, and now she has been given a cute geeky goth cast to her personality, Kimberly's inspiration for making sense of the deliberate-but-difficult contradictory and anachronistic elements of the piece. Meanwhile, Kimberly's approach to creating the scene out of thin air in great detail demonstrates the Idyll's connection to earlier Mime, and indeed Theocritus' Simaetha Idyll was also known as one of his "urban mimes."

Kimberly Mikec plays a staffer in "Game Change," an upcoming HBO movie, starring Julianne Moore. In addition, she has performed in various plays and musicals in the United States and Germany. She has played major roles in in such plays as "Who's Afraid of Virginia Woolf," "The Real Thing," "Plaza Suite," "Trojan Women" and "Diary of Anne Frank."

The Sorceress Idyll exemplifies the form as I've reinterpreted it from Theocritus and its evolution from Mime; that is why it kicks off Idylls for a Bare Stage both as book and as theatre (when presented in full).

The piece Genna has taken on is a compression of the Antigone tragedy into a packed and smoldering new form;  it pushes the Idyll to its limits, and Genna has evolved her performance to fill the form every instant and convolution of the way, intensely.   I think, through Genna, Antigone can be made understandable to us like never before.  Her own performance-process working through of an understanding of Antigone's decision and dilemma recently brought her to a fantastic aphorism during rehearsal:  "Not to pollute the self with a weaker action" - Genna Davidson


Genna Davidson is a professional actress in Washington, DC. She has performed with Deviated Theatre, dog & pony dc, The Bay Theatre Company, and numerous Capital Fringe Festival shows. In addition to acting, she plays violin/fiddle with her band, The Josh Drews; she's a puppeteer with Wit's End Puppets; and she's hoping to be a Linklater Voice teacher one day. Some of her favorite onstage experiences include being an apprentice clown for 500clown, and playing fiddle for a workshop production of The Rude Mechanicals' I've Never Been So Happy when it was performed at Arena Stage. She graduated from the University of Maryland, College Park, in 2008 with a BA in Theatre Performance.

New York friends have a chance to see us at the 2pm panel (the performances won't begin until close to 3pm), Saturday October 22nd, at Fordham University, Lincoln Center Campus, 60th Street and Columbus Avenue.  Panel attendees need to register to get a badge in order to move around the SAGP conference, but it's free to do so.


And of course, Washington D.C. Metro -area friends will have a chance to see Genna Davidson and Kimberly Mikec in action, as described, on November 20th.

"A Shared Imagining" is a phrase that identifies the real medium of poetry on the page and the real venue of performance on the stage: the human mind.

Through the form of the Idyll, as originated by the ancient Greek poet Theocritus, and as re-conceived by Magus Magnus in his book, Idylls for a Bare Stage, the poetic monologue is taken as theatre in and of itself, capable of being presented almost anywhere, and thereby affirming the actor as an individual artist.

The art of performing the Idyll is the creation of a mindscape whatever the setting, a shared theatre space of the mind.

Idylls for a Bare Stage 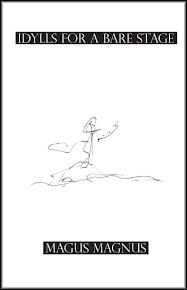